Yogyakarta two days tour designed to bring you around the town by visiting some historical places, ancient Temples and Natures. The tours available to start from airport, rail station or hotels located around Yogyakarta area. This tour package also available to customize based on your destinations request, as long as the time and the distance reachable.

In this Yogyakarta two days tour package, the tour will start by visiting Borobudur temple. The temple was built in the 9th century during the reign of the Syailendra dynasty, the temple’s design in Gupta architecture reflects India’s influence on the region, yet there are enough indigenous scenes and elements incorporated to make Borobudur uniquely Indonesian. The Sailendra are the ruling dynasty in Central Java at the time. It was built as a place for glorifying Buddha and a pilgrimage spot to guide mankind from worldly desires into enlightenment and wisdom according to Buddha. The temple located in Magelang central Java Indonesia.

Borobudur built in the style of Mandala which symbolizes the universe in Buddhist teaching. This structure is square shaped with four entry point and a circular center point. Working from the exterior to the interior, three zones of consciousness are represented, with the central sphere representing unconsciousness or Nirvana.

Pawon Temple is located right on the axis lines connecting Mendut Temple and Borobudur Temple. The rectangular-shaped temple with terraced roofs, and a chamber inside is sized much smaller than Mendut Temple. Pawon Temple lies quite hidden, surrounded by houses. Composed of volcanic rock with a combination of ancient Javanese Hindu and India, and the similarity of decorating style with Mendut Temple and Borobudur Temple, the experts agreed that the three temples were built in the same century. This is confirmed by Kayumwungan inscriptions or Karangtengan inscriptions dated 26th May 824 BC.

The temple is slightly facing to the northwest and stand on square base. Moreover, the beautiful Kala Markala carving was adorning each of entrance gates. We can find this Kala Markala design in common classic Javanese temples. Meanwhile, the relief of Boddhisatvas and Taras are well carved on the wall of the temple. We can also find the relief of Kalpataru (tree of life), flanked between Kinnara-kinnari. In addition, the square chamber inside is empty with a square basin in the center of it.

Mendut is located in Mendut village of Mungkid subdistrict in Magelang, Central Java, approximately 38 kilometers to the northwest from Yogyakarta. It is only 3 kilometers from Barabudhur Temple, which is believed to be closely related to Pawon and Mendut temples. The three temples are on a straight line from north to south. Mendut was built by the first king of Syailendra dynasty in 824 AD. The assumption is founded on the content of Karangtengah inscription (824 AD), which mentions King Indra had built a shrine called Wenuwana (bamboo forest) or Mendut temple. This temple is also assumed to be older than Borobudur.

At a glance, Mendut temple might look similar to other Buddhist temples. But once people step in, Mendut temple’s own characteristics will expose shortly. Three big sculptures of Buddha and fable reliefs make the temple looks different from others. Besides, as it becomes a site for Buddhist priests to worship. The temple becomes a must-visit religious heritage.

There is one other thing you can do if you want to enjoy the scenery of Merapi Volcano. If you want to see it from close range but not hike it up, you can try Merapi Lava Tour Jeep Off-road. In this trip you will explore the slope area of Mount Merapi with 4WD jeep and going off-road through the villages to see some special destinations.

Merapi is still active. It becomes more interesting since had it last big eruption in 2010. This damage the villages and area around. But who can expect that this can be a fun lava tour Merapi jeep? The lava tour is something you should try, as you will see the damage, big stone, lava stream, and all the leftover.

There are three options available for the Merapi Lava Tour. These are the short, medium and long route. The short route consists of an 1,5 – 2 hours journey around Merapi. It costs Rp350,000 to rent the jeep. Each jeep can comfortably fit three passengers, but you can squeeze in up to five passengers if you need to.

Built on the ninth Century, Prambanan Temple is the largest Hindu temple complex in Indonesia. The first mention of Prambanan was in the Syiwagrha Inscription (856AD). With three main temples for the Trimurti; Shiva the destroyer of the universe, Vishnu the keeper of the universe, and Brahma the creator of the universe. Back in the glory days of the old Mataram Kingdom, Prambanan is used as a Candi Agung for various royal and religious ceremonies.

This is the most famous and also the most magnificent of Central Java’s temples or more precisely complex of temples. Situated about 15 kilometers from Yogyakarta, the top of the main shrine is visible from a great distance and rises high above the scattered ruins of the former temples. Prambanan is the masterpiece of Hindu culture of the tenth century. The slim building soaring up to 47 meters makes its beautiful architecture incomparable. Seventeen kilometers east of Yogyakarta, King Balitung Maha Sambu built the Prambanan temple in the middle of the ninth century. Its parapets are adorned with bas-reliefs depicting the famous Ramayana story. This magnificent Shaivite temple derives it name from the village where it is located.

The temple was severely damaged over the centuries by earthquakes and volcanic eruptions, and it was eventually abandoned to the jungle and became surrounded by legends and myths. The ruins were rediscovered in the 1800s by a British explorer, but proper restoration work didn’t start until the 1930s under the Dutch.

Prambanan in recent years has had quite a bit more restoration work than Angkor, which admittedly makes it feel a bit less authentic, but you can still expect to see some of the same amazing architecture styles, with towering stone buildings and bizarre Hindu carvings. Today, Candi Prambanan is recognized as a UNESCO World Heritage site, and many tourists visit every year. Together with Borobudur, it’s one of the highlights of a trip to central Java.

Goa Jomblang is a cave located in Gunung Kidul, approximately 1.5 hours by car from Yogyakarta city. This cave is 60 meters deep with a diameter of 50 meters, which was formed by dissolution and collapse of 15-20 million-year-old limestone. The bottom of the sinkhole is connected to a horizontal passage that ends at Grubug Cave, which has a depth of 90 meters and is the deepest vertical cave in Java island. At a certain time of day, around 11:00AM – 12:00PM the sun is at the perfect angle to shine light beams through from above, giving the cave an out of this world feel.

Since the cave is privately owned, you cannot just simply head down on your own. You will need to join the tour which departs just once a day that will bring you down to the cave, and help guide you to the end of it.

The whole experience is made up of a few parts. Since the opening of the cave is located about 150 feet below surface level, you will need to rappel down to the bottom of this sinkhole. Once everyone is down at the bottom, a few guides will take you down the muddy path for about 20-30 minutes to the end of the cave. At the end of the cave, you will wait until the perfect moment as the light beams shine through and brightens up the dark cave. After enjoying your time there, it is another muddy trek back to the cave entrance, where you will be rappelled back up to the top. 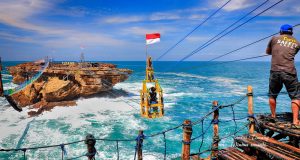 Timang Beach is spotted exactly at Purwodadi Village, Tepus Sub district, Gunung Kidul Regency, Yogyakarta Special Region, Indonesia. This southern part of Yogyakarta has a wide coastal line and many emerging beaches for tourism objects. One of the great attractions of this coastal cluster in Gunung Kidul is Timang beach. They have smooth beige sand and the wide spread of steep corals along the coastline.

Although better known for its coral islands and gondola rides, Timang Beach certainly also has an attraction in terms of beauty, activities such as a walk on the beach to enjoy the sunset and photo hunting can still be done on this beach.

To warm up before riding on the gondala, you can try to climb the suspension bridge made of wood along 100 meters, this bridge is one that connects the coast of Timang and Timang Island, You will feel a tense sensation when you set foot on this bridge, adrenaline will race when stepping foot step by step down the bridge to the island of Timang, plus the roar of ferocious waves below you will also make the heart pounding thumping along walking on the bridge.

It will truly be an unforgettable experience. But don’t worry, your security will be maintained because the right and left sides of this bridge are equipped with a protective rope that is very strong and is in accordance with international standards.

You will feel the peak of tension when riding the gondola in Timang Island. Just like a suspension bridge, this gondola also has a track as far as 100 meters. But what makes this gondola unique is that it looks very traditional, does not use iron and machinery, the gondola trajectory is made using a rope that is very strong and driven using human power. Besides being a favorite vehicle for tourists, this gondola is also a means of transportation for fishermen to and from the island of Timang. This traditional gondola has a height of about 11 meters from the surface of the water.

The price for this tour package is start from USD 170 per person, please contact for more information. 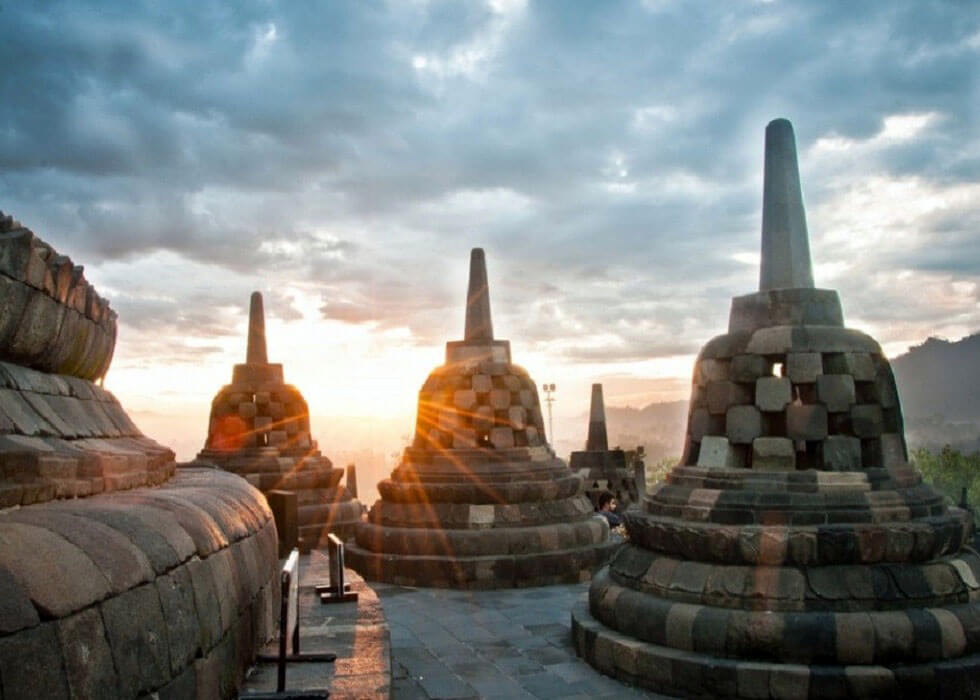 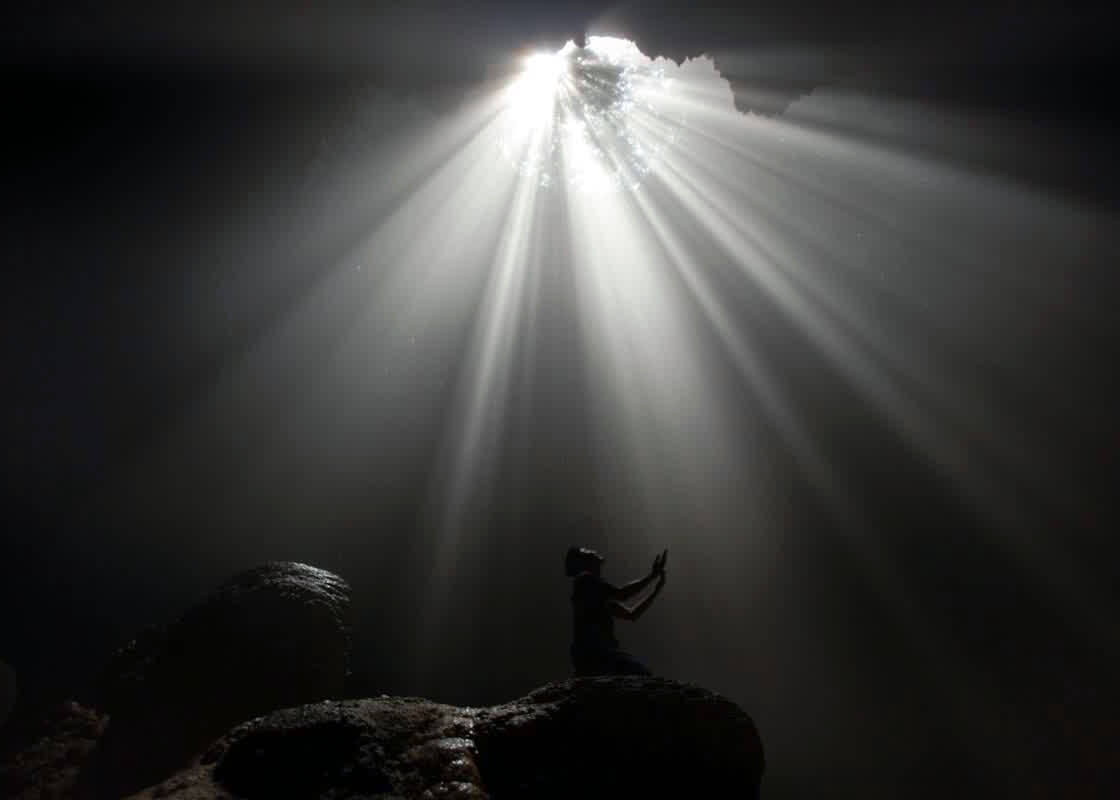 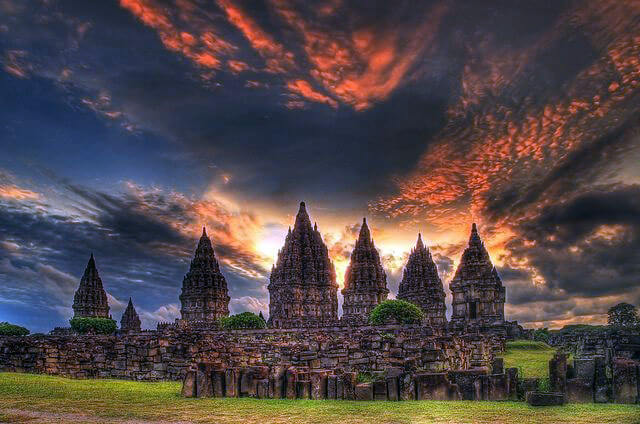 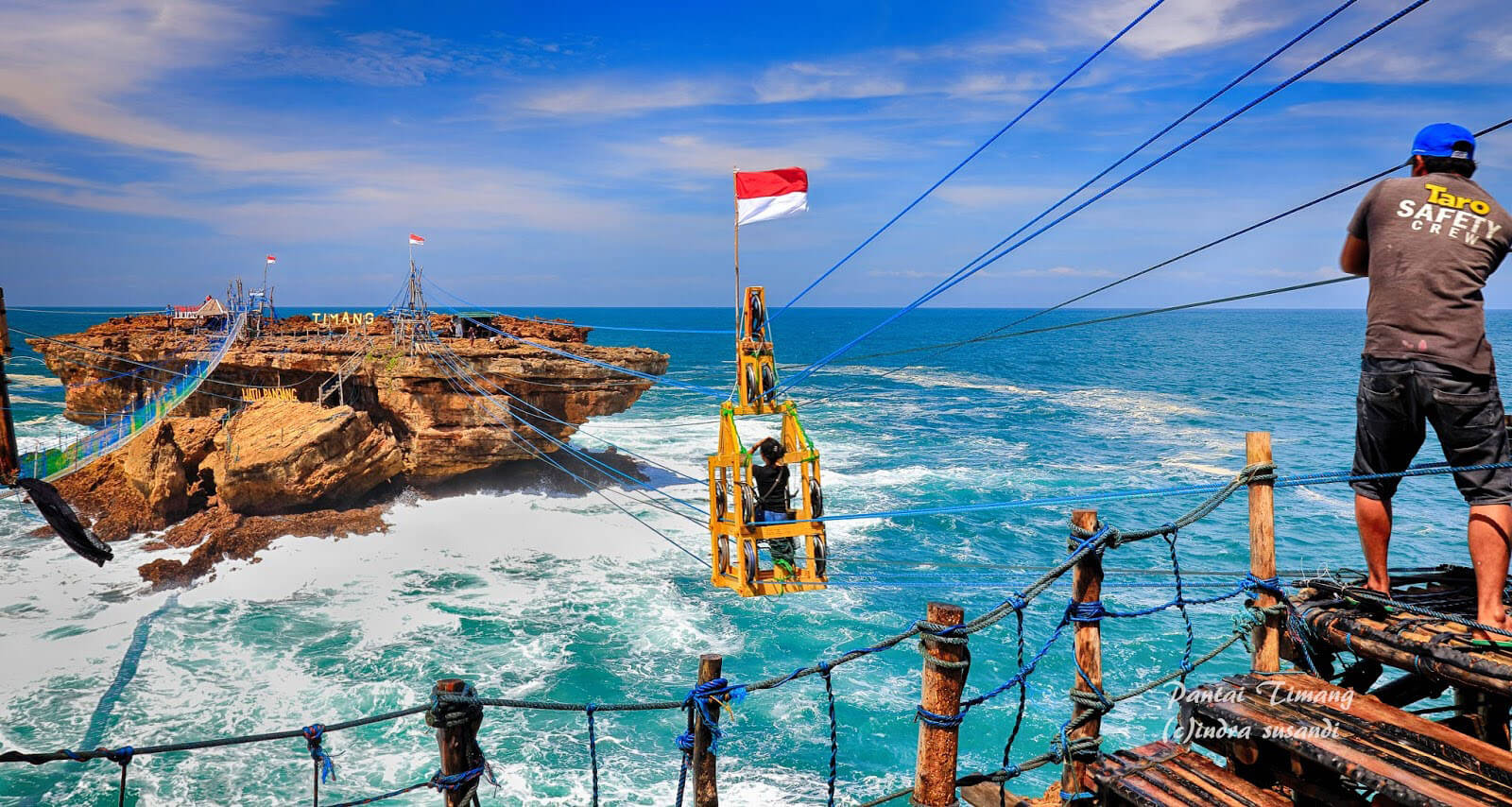 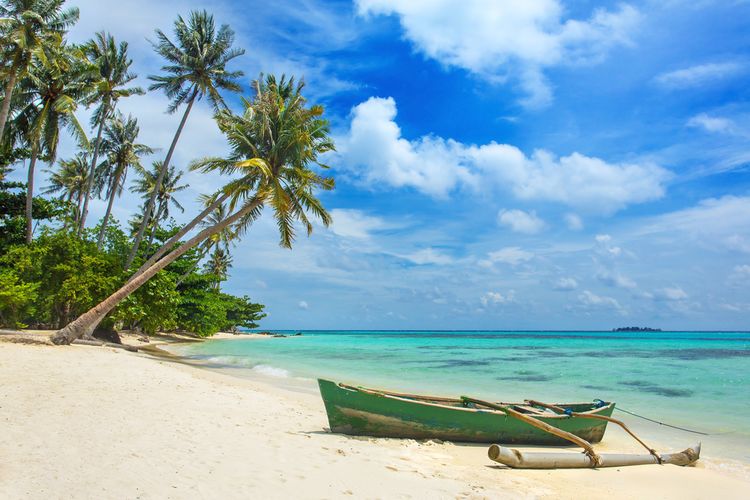 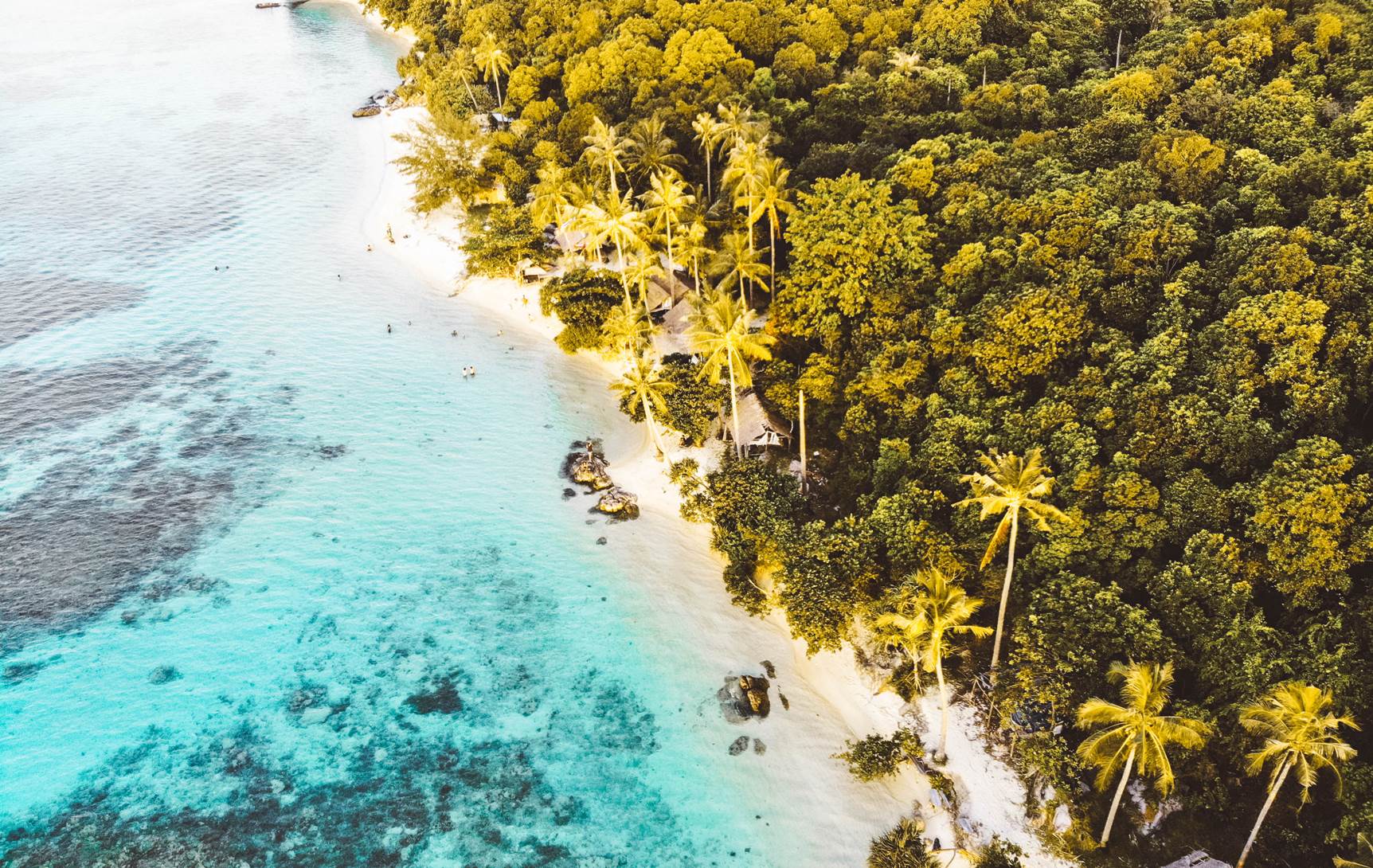