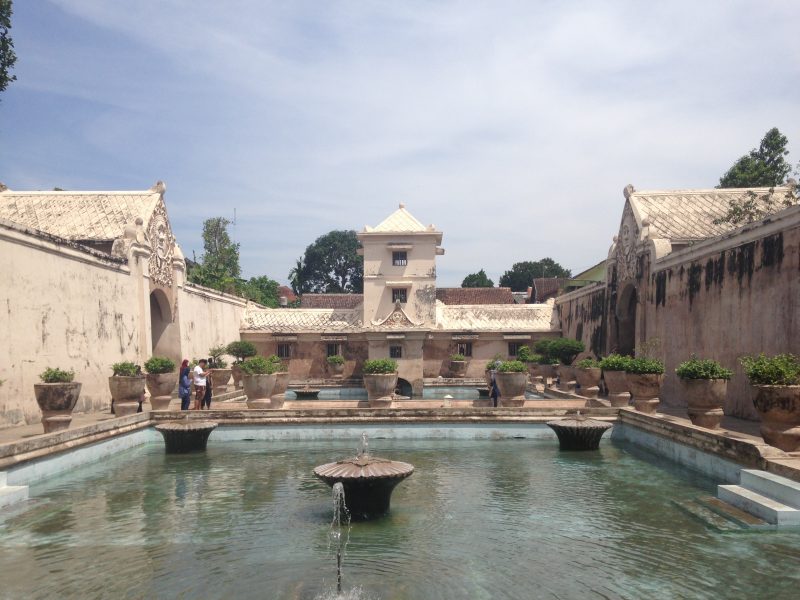 If you have been to the Yogyakarta Palace, try to visit Taman Sari Water Castle. It is in the south of the palace. The buildings are very unique, because it combined several architectural styles, such as Java, China and Europe. The building complex is not incomplete, but still leaves the main building. Let’s discovering the uniqueness of Taman Sari.

The main function of the water castle is the resting place for Sultan (King of Yogyakarta) and family. Therefore, in this area is found swimming baths, bedrooms, mosque, and many more. Why is called water castle? Because Taman Sari uniquely designed with surrounded by artificial lake.

In addition, the building complex also served as a bulwark. So if the palace was attacked by enemy, the Sultan and family can save themselves through underground passage. But it has been closed and does not working like before.

Taman Sari had many buildings with their respective functions. For example, Gedung Panggung was functioned as special place for Sultan to watching dances performace. The swimming baths in Taman Sari consists three parts. The first part is Umbul Kawitan (used by prince and princes), Umbul Pamuncar (pool for the concubines), and Umbul Panguras (pool for the king).

Due to the Taman Sari was very spacious, so the carriage was used as means of transportation. You can find Gapura Agung (Great Gate), where the arrival of the carriage. It was used by Sultan and his family). The gate has unique design, with predominance of ornamental flower and bird wings. This gate was the entrance for Sultan when going to the Taman Sari.

Special Place for Sultan When Meditation

If you are heading south, you can find special place for the Sultan. Before heading off to war, Sultan will meditate in that place. Silent and tranquil atmosphere would you feel. War strategy planning and how to negotiate with the enemy also did by Sultan in this place.

The area was also used as the storage of various weapons, armor, and keris care (Javanese weapon). The courts of the place was usually used by soldiers as practising sword. The various functions of the building as sign that Taman Sari was used for stronghold from enemy’s attack.

Another unique place is Sumur Gumuling. The building is an underground mosque, which was used as place of worship the king and family. The building consists of two floors with unique design. In the middle of the mosque, there is well known location with five stairs.

You can walk to north and will find Gedung Kenongo. The building served as dining of the king. It desaigned highest in the Taman Sari complex. So it becomes a privileged spot to watching beautiful sunset. In fact the entire of Taman Sari can be seen from this building. The triumph of the kingdom still can you see when visiting Taman Sari Water Castle. As a good traveler you also have to maintain the cultural heritage by not vandalized and keep clean.